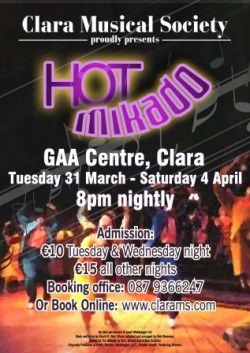 In the city of Titipu, the Gentlemen of Japan set the big-band-meets-Japan scene. Suddenly, Nanki-Poo arrives, asking where he might find Yum-Yum. The men ask who he is, and he answers, A Wand'ring Minstrel I. We learn that he fell in love with Yum-Yum while traveling with the Titipu orchestra, and having heard the rumor that her fiancé had been executed, he has returned to wed her. However, the men inform Nanki-Poo that her fiancé, Ko-Ko, was actually saved at the last minute and the two are to be married that afternoon (And the Drums Will Crash). They also explain that Ko-Ko was appointed Lord High Executioner, so now no one in Titipu can be executed (because Ko-Ko is first on the list). Ko-Ko himself appears, and sings about the many people he would execute, given the chance (I've Got A Little List).

Yum-Yum and her two sisters, Pitti-Sing and Peep-Bo, make their way home from school (Three Little Maids), when they run into Nanki-Poo, who tries to explain his real identity to Yum-Yum: he is the son of the great Mikado, and heir to the throne, and has run away from an undesired arranged marriage. They mourn their betrothals, embracing and lamenting, This Is What I'll Never Do. Ko-Ko enters, having just received a letter saying he must execute someone within the month or he will lose his job, and Titipu will be "reduced to the rank of a village." Ko-Ko, Pooh-Bah (the Lord High Everything Else) and Pish-Tush contemplate who will be sacrificed (I Am So Proud), when Nanki-Poo enters, about to kill himself for lack of Yum-Yum. Ko-Ko spots an opportunity, and the two strike a bargain: one month of wedded bliss for Nanki-Poo and Yum-Yum, before he is to be executed.

The town celebrates (Let the Throng Our Joy Advance) until Nanki-Poo's vengeful fiancé, Katisha, appears (Katisha's Entrance). Yum-Yum and Katisha are about to quarrel when big sister Pitti-Sing steps between them and tells her off, For He's Gonna Marry Yum-Yum. Katisha grieves that "The Hour of Gladness is dead and gone," before attempting to expose Nanki-Poo's identity to the town. Yum-Yum, privy to his secret, cuts her off and leads the town in song, drowning her out (Act One Finale).

The act opens with Yum-Yum preparing for her wedding to Nanki-Poo (Braid the Raven Hair), and she marvels at her own beauty (The Sun & I). The ensemble enters, decorating for the wedding (Swing A Merry Madrigal). All is joyous until it is revealed that an executed man's wife must be buried alive, upon which Yum-Yum begins to rethink the plan (Here's A Howdy Do). Pooh-Bah announces the Mikado is on his way, so Pooh-Bah hurriedly marries them, Ko-Ko forges a death certificate for Nanki-Poo to satisfy the Mikado's decree, and they send the couple to hide. The Mikado arrives (The Mikado Song) - not to check up on Ko-Ko, but actually to find his son, Nanki-Poo, who is set to marry Katisha. Ko-Ko tells him that his son has been executed, insisting that he did not know his identity, so the Mikado cheerfully informs him that he and his accomplices will be sentenced to death by boiling oil. A panicking Ko-Ko begs Nanki-Poo to come out of hiding, but he refuses, saying that he will surely be executed for his marriage to Yum-Yum by the request of Katisha. She is expressing her sorrow for her deceased fiancé (Alone and Yet Alive) when Ko-Ko appears, to profess his love for her, and to proclaim that he will die if she does not marry him (Tit-Willow). She is wooed (Beauty in the Bellow), and begs mercy for Ko-Ko and his companions. Now that everything has been resolved, Nanki-Poo and Yum-Yum reappear for a happy ending (Act 2 Finale).