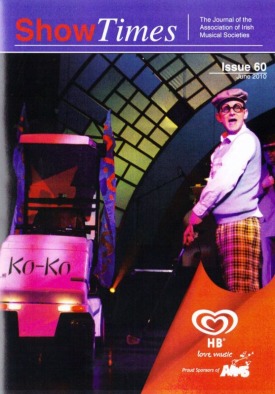 Every year there is a show that is released and catches the public’s imagination. This year it was “Beauty and the Beast” and I had the opportunity to see the production staged by Clara Musical Society in Clara GAA Hall. This was a totally in house production and in all honesty when I saw that even costumes had been an in house effort I was concerned.

My word what a visual treat. It was a fabulous set. I have visited Eurodisney and the Magic Kingdom in Florida and when the lights hit the set it this was exactly what they have there! I have to hand it to Liz Rickard and Mary Cornally they did a fabulous job in the enchanted costumes.

In the role of The Beast was Eoghan Fingleton. I could have listened to him all day. He was magnificent and made unknown songs assessable to us. That sounds daft but his numbers aren’t on the movie and the audience weren’t expecting them. “If I cant love her” was just wonderful.

I felt Karen Minnock really was Belle. I just felt she had the right voice and right look. She moved well on stage and gave a solid performance.

As Gaston, James Paradise was amazing. He seemed to grow in stature as the show went on and when it came to chasing the Beast he seemed to encompass the stage. His side kick Ultan Keena as Le Fou was his equal. He was a real stooge. It was a good combination.

Louise Handy as Mrs Potts had the right manner. She had the “song of the show” “Beauty and the Beast” and she sang it beautifully. I felt moved.

As Cogsworth I felt Wayne Handy needed to work on his projection because I lost a lot of his dialogue. He hadl the necessary self important air for the role.

I liked Graham Finnerty as Luniere. He gave a very fine performance and moved well onstage. His singing was very strong.

I was very taken with the performance of Stephen Rabbette as Monsieur D’Arque. He had a creepy somewhat disturbing presence that was very effective.

I felt that Tommy Scanlon had all the gestures and mannerisms for Maurice. However his diction wasn;’t good and he was hard to understand.

Aoife Fitzsimons had the flirty manner required for the role of Babette.

I liked the silly girls – and they were silly. Well done to Sinead Donoghue Aoife Devery and Jayne Louise Kelly.

Musically I felt the show was strong but the band was too strong and needed pulled back slightly. They were just a little too heavy. Choreographer on the production was Sarah Griffin. It can’t have been easy to move all the performers in such big costumes. I felt that two big numbers seemed to lose their way, “Be our Guest” and “Gaston”. The transformations were good the final one being stronger.

Directorial credit does to Alan Recks and his assistant Rufina Recks. What a production they gave us.

A number of years back I taught a teenage boy with ASD and his special interest was “Beauty and the Beast”. I saw 40 minutes of it everyday for two years and know every bar of the score. I could not have coped with anything other than the movie on stage and indeed the audience did not want anything other than the movie. We got the movie and we loved it. As I sat down to write this review I relived this show and its delights. I salute the enormous effort that you made. This really was the effort of a life time. Should you never do a show again your efforts with this one will live on – though I have no doubts you will be back.

Thankyou for a very special evening.